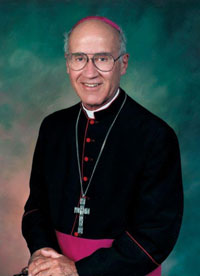 Victor Galeone, raised in Baltimore, earned a Licentiate in Theology at the Gregorian University in Rome.  Ordained a priest in 1960, he served in Baltimore as pastor, then as professor and principal of the day seminary. He earned an M. Ed at Loyola College. He also served as a missionary in Peru for eleven years. In August 2001 he was ordained the ninth bishop of the Diocese of St. Augustine, where he served until his retirement in June 2011.

When handed a twenty-five year sentence in an Alabama court room in 1987, Russell L. Ford was an agnostic living as a practical atheist. While still a catechumen in 1988, Ford’s priest insisted he begin teaching the catechism evangelistically. God blessed that effort with many conversions of hardened criminals. Ford personally has sixty-two godsons, he has played a direct role in the conversions of roughly two hundred souls, the catechists he has trained operate successful evangelistic apostolates in eleven of Alabama’s eighteen major penal institutions, and he founded a national prison apostolate called Prisoners of the Perfect Prisoner National Network.

After his reception into the Church on the feast of Our Lady of Lourdes in 1989, Ford’s priest began urging him to write for the Catholic media. Ford has become a highly respected writer on catechetics, apologetics, and evangelization, having been published in such publications as Homiletic and Pastoral Review, This Rock, Immaculate Heart Messenger, and many others.Ford is also author of the popular book The Missionary’s Catechism, which has been endorsed by Catholics such as apologist Karl Keating, the late theologian John Hardon, and Fathers of Mercy Superior General Fr. Bill Casey.

Listen to a sample of Russell's story on his two tape set, No Escape, which tells about his conversion.

Marty Barrack was born a New York City Jew in 1942. He grew up in the Bronx and married his wife Irene in 1967.  He earned his M.A. in political science in 1969, and went on to work for the U.S. Customs Service as an inspector; then an import specialist; then as a communications specialist.  In 1985 he moved to the U.S. General Services Administration where he did government-wide policy analysis in computers and communications.  At that time he also completed his first book, How We Communicate: The Most Vital Skill, published by Glenbridge Publishing, Ltd., in Lakewood, Colorado.  On Easter Vigil 1989, Marty was baptized into the Catholic faith.  Jesus used that book to give him his mission for the rest of his earthly life: "Communicate My Word as far and wide as you can."   Marty's completion in Christ soon led him to realize that the Catholics have prepared only minimal help for Jews who seek to become Catholic.  He set out to write a book that would highlight the Jewish origins of the Catholic faith so that inquiring Jews would see the continuity between them.  The result is Second Exodus.

Dr. Eunice Lasché, M.D. grew up a Southern Baptist in Florida. After reading the Confessions of St. Augustine as a young adult, she was further compelled to study the writings of the early Church Fathers. Through this study of the early Christian writings, she was led to embrace the fullness of truth and she entered the Catholic Church in 1960. Shortly after her conversion, she became a Franciscan tertiary (lay member of the religious order of St. Francis). Her subsequent study led her to recognize that the beliefs of the early Christians, who were so close to Christ, are the same beliefs of the Catholic Church of today. After her entrance into the Cathlolic Church, which was founded by Christ Himself, her interest in the study of early Christianity continued. She had a special attraction to St. Ignatius of Antioch who lived in the first century. The early Church in the time of St. Ignatius had many of the same problems we are experiencing in the Church today. Dr. Lasché began to see the importance of the historical records of the early Church for Christians of our times. After going into semi-retirement from the practice of medicine, she began to collect her thoughts on this subject in writing and now wants to share them with us. This book is the result of her devotion.

William Doyle "Bill" Gilligan passed away peacefully in his sleep at home in Houston on 23 April 2004 while preparing to go to daily mass. Bill was a native of Limerick, Ireland, a U.S. Army veteran of the Korean War, lived for many years in Chicago where he received an undergraduate degree in philosophy from Northwestern University. He was a resident of Houston for over 30 years and publisher of Lumen Christi Press. He provided Catholic publications to many Catholic outlets throughout the U.S., Ireland and Europe. After retiring from publishing Bill made pilgrimages to holy sites to do research for his devotional books. This photograph was taken in Bill's home about four months ago where Bill had been working on a devotional book on St. Patrick. He was a good friend and mentor and wonderful story teller. Bill was a lifelong bachelor and is survived by five brothers and sisters, their spouses, and numerous nieces and nephews. He will be missed by all his family and friends. Please pray for the repose of his soul.

"Can the souls in Purgatory help us? There is no article of faith which says that the souls in purgatory can help us. However, the Church allows the faithful to privately ask for help from these souls. And there is nothing to hinder us from believing that the holy souls are allowed by the mercy of God to remain in touch with those whom they knew and loved on earth. One must also consider that when the holy souls do get to heaven and are face to face with God, they will certainly remember to intercede for their friends on earth, particularly those who contributed with prayers to get them to heaven sooner."

"Archdeacon Bartholomew Cavanagh was pastor of the parish of Knock, Ireland when Our Lady appeared to a group of people. He had a great devotion to the souls in purgatory. This devotion and his devotion to Mary, Mother of God, were inseparable. She is the mother of her children, above all her suffering children. She is the Refuge of Sinners here on earth and she is also the helper of the souls in purgatory. A few months before the apparition the Archdeacon began to say one hundred masses for the poor souls whom Our Lady wished most to release. It was on the day that the hundredth mass was said that Our Lady came to visit Knock on August 21, 1879, as a wonderful gift, showing the gratitude of the released souls." (Pages 26&27, Devotion to the Holy Souls in Purgatory by Bill Gilligan.)

Eternal rest grant unto him, O Lord; and let perpetual light shine upon him. May his soul and all the souls of the faithfully departed, through the mercy of God, rest in peace. Amen.

A faithful friend is a sturdy shelter,

He who finds one finds a treasure.

A faithful friend is beyond all price,

No sum can balance his worth.

A faithful friend is a life saving remedy,

Such as he who fears God finds.

For he who fears God behaves accordingly,

Father Anthony Dao, the Provincial Promoter for the Dominican Family in the Southern Province, wants to awaken the "sleeping giant" of the laity for the Third Millennium. His timely book shows how members of the laity can inherit the treasures of St. Dominick's charism and learn the contemplative life. The Dominicans nourish and strengthen their laity through union with God by the study of Theology, Holy Scriptures, and Philosophy. Find out how you can join 200,000 plus lay members of the Dominican family who are living according to the spirit and charism of St. Dominic through prayer, study, missionary works and contemplation.

All images and text © 2001, 2015 Magnificat Institute Press. All Rights Reserved.