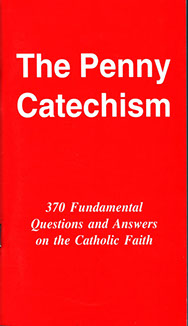 Until the 1960’s catechesis was primarily doctrinal—an accurate account of the truths revealed by God and entrusted for safekeeping and accurate exposition to the Catholic Church.

The term for this in the early Church was didache, which was the instruction given to converts to the Faith before they received the sacrament of Baptism. There is some evidence that it was expressed in a set form of words and was learned by heart, as was the practice of Rabbinic Judaism. Later the content of the Faith was summed up in the Apostles Creed which the neophyte recited before receiving the sacrament of Baptism.

Later still, the whole content of the Church’s teaching was divided into four parts: Creed, Commandments, Sacraments and Prayer and this division has been accepted in the recent Catechism of the Catholic Church, published in 1991.

In the 19th century there were the Baltimore Catechism used in schools in the United States and this, The Penny Catechism, authorized for use in schools by the Bishops of England and Wales. Given to G.K. Chesterton by the parish priest when G.K.C. approached him about entering the Catholic Church, the great thinker described this little book as a “marvellous compendium of Christian wisdom.”

This doctrinal catechesis and the books which embodied it were discarded in the 1960’s in favor of a new catechetical method called experiential. This had as its starting-point the religious experience of the child, the result of the indwelling of the Holy Spirit, one of the effects of the reception of the Sacrament of Baptism.

In 1983, on a visit to France, Cardinal Ratzinger described the abandonment of the catechism as a bad blunder. With good reason. For as a result of the new catechetical method, several generations of Catholics have grown up ignorant of the content of the Faith.

The rote method is still the most effective for teaching the young and The Penny Catechism, which can also be used as a handy and quick reference for adults, is a simple and time tested way to pass on the Catholic Faith. Its small size, 4x7 inches, and short length, 80 pages, makes it possible to carry this "marvelous compendium of Christian wisdom" in a 21st century shirt pocket.

All images and text © 2001, 2015 Magnificat Institute Press. All Rights Reserved.